Canadian dual citizens can travel freely to the U.S. despite Trump travel ban

Canadian citizens can travel freely to the United States despite U.S. President Donald Trump’s sweeping immigration order that bans visitors from seven Muslim-majority countries, the Prime Minister’s Office says.
Saturday’s news came hours after the U.S. State Department told CBC News the 90-day travel ban covers all people who have a nationality or dual nationality with Iraq, Syria, Sudan, Iran, Somalia, Libya, and Yemen — which would include tens of thousands of Canadians.
View image on Twitter 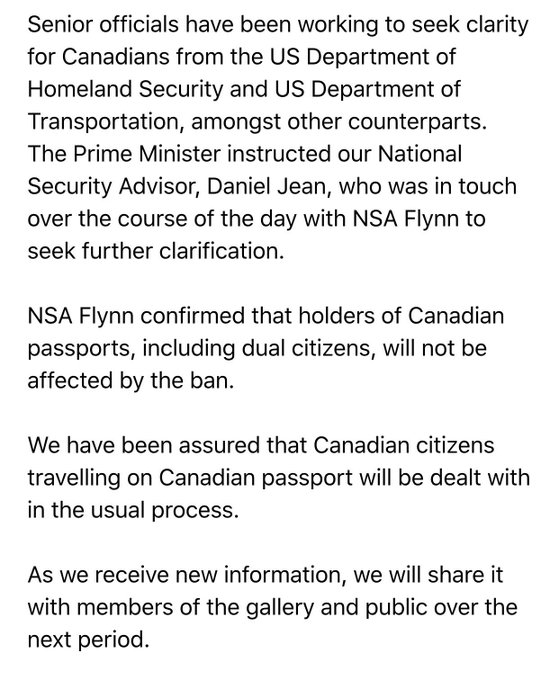 The NDP has written to the Speaker of the House of Commons requesting an emergency debate on the immigration ban, a day before Parliament is set to re-open after a six-week break.
NDP Immigration critic Jenny Kwan said the ban will have “disastrous implications” for thousands of travellers, family members, students, business people and asylum-seekers.
“A ban against individuals based upon race, religion, or country of birth, implemented by our closest neighbour, cannot be tolerated,” Kwan said in the letter. “Canadians cherish their role as global citizens and defenders of human rights and as their elected representatives it is our duty to respond to these extraordinary events.”
Trump’s executive order on Friday curbs travel to the U.S. for people coming from the seven Muslim-majority countries. In an email to CBC News earlier on Saturday, a spokesperson for the U.S. State Department said: “Beginning January 27, 2017, travellers who have nationality or dual nationality of one of these countries will not be permitted for 90 days to enter the United States or be issued an immigrant or nonimmigrant visa.”
“Those nationals or dual nationals holding valid immigrant or nonimmigrant visas will not be permitted to enter the United States during this period.”
It’s not clear at this point whether the ban affects dual nationals who have citizenship with one of the banned countries and another country outside of Canada.
At the Los Angeles International Airport, people protest U.S. President Donald Trump’s sweeping executive order barring refugees and travellers from seven Muslim-majority countries. Canada says its citizens will not be affected. (Patrick T. Fallon/Reuters)

Before the PMO issued the statement of assurance to Canadian dual citizens, Leena Yousefi, a family and immigration lawyer in Vancouver, told CBC News she is “deeply saddened and offended” by Trump’s order.
Yousefi, 34, said her family immigrated to Canada in 1996 and she’s only returned to Iran once to visit family and hasn’t bothered to update her Iranian passport.
She said she often travels to the U.S. and was hoping to start a new law firm there because she often works with Americans looking to immigrate to Canada.
“We’re just completely shocked,” she said. “We have family in the United States. We’ve never had a problem with American people.”
“I think all the Iranian-Canadian professionals … need to speak up,” she said. “We’re not terrorists, at all.”

Plenty of people in Canada are still affected by the executive order.
Mehran Shirazi, a PhD engineering student at Simon Fraser University and a permanent resident in Canada, said he doesn’t know when he will be able to see his brother in New York City, who is awaiting a green card for the U.S. Both were born in Iran.
Shirazi’s parents haven’t seen his brother in six years and had planned to visit to New York this spring.
“Now they cannot do that. They don’t know when, if at all, they can see him again,” he said.

According to the 2011 National Household Survey from Statistics Canada, the latest survey available, there were over 35,000 Canadians in 2011 who shared citizenship with the countries banned.
The survey also showed there were 74,550 people in Canada from those countries who do not have citizenship in Canada:
The survey was compiled before Canada’s commitment to resettle tens of thousands of Syrian refugees in 2015.
A federal judge in New York on Saturday night barred U.S. from deporting travellers with valid visas covered by Trump order, which the American Civil Liberties Union says will affect 100 to 200 people detained at airports. It’s unclear how many are Canadian.
Source: http://www.cbc.ca/news/canada/canadian-affected-trump-travel-ban-refugees-immigrants-1.3957059

Source:
DANIEL DALEWashington BureauEMILY MATHIEUInvestigative News reporter
The word from National Security Adviser Michael Flynn, relayed to the media by Canada’s Washington embassy, ended a day of confusion and turmoil over a vaguely worded Trump policy that had appeared to ensnare tens of thousands of Canadian citizens and abandon 150 years of border tradition.
“The prime minister instructed our National Security Adviser, Daniel Jean, who was in touch over the course of the day with NSA Flynn to seek further clarification,” Prime Minister Justin Trudeau’s office told reporters.
“Flynn confirmed that holders of Canadian passports, including dual citizens, will not be affected by the ban. We have been assured that Canadian citizens travelling on Canadian passports will be dealt with ‎in the usual process.”
The Friday order had left Trudeau scrambling not only to develop an appropriate response but to figure out what exactly was happening. And it left Canadian communities confused, alarmed and furious, reassessing both their travel plans and their sense of their place on the continent.
“Our community is very devastated,” said Osman Ali, director of the Somali Canadian Association of Etobicoke, before Flynn’s clarification.
The policy had seemed to prevent travel by dual-citizen Canadian students and businesspeople living in the U.S., effectively prohibiting them from leaving the country, and dual-citizen Canadians living in Canada who wanted to visit the U.S. The president of the Canadian Science Policy Conference booked his regular flight to a major American science conference in February. Mehrdad Hariri thought he needed to call Air Canada and cancel, and he was stunned.
“Absolutely shocking,” sad Hariri, a dual Canadian and Iranian citizen. “Absolutely shocking. It’s so disappointing.”
Trump’s 90-day ban, which he framed as an anti-terror measure, is not aimed specifically at Canadians. It is designed to forbid entry by residents of Iran, Iraq, Sudan, Somalia, Syria, Yemen and Libya.
But to the astonishment of U.S. allies, the Department of Homeland Security announced early Saturday it did not exempt people who are citizens of those countries and also citizens of countries like Canada, France and Australia, which have never been targeted by broad restrictions of this kind. Nor, they said, did it make exceptions for people who hold “green cards,” permanent residents who are rigorously vetted.
It was not the “total and complete” Muslim ban Trump promised during a campaign in which he practiced open Islamophobia. But it appeared far more sweeping and punitive than lawmakers, diplomats and lawyers had expected when the details were leaked earlier in the week.
“There has never been a measure like this before,” said Lorne Waldman, a top Canadian immigration lawyer in Toronto, before the clarification. “One can only assume that they didn’t fully think through all of the consequences of what they were doing in terms of the havoc it’s going to cause.”
“It certainly appears to be unprecedented, and it has certainly been both developed and promulgated in an ignorant and chaotic fashion,” said Robert Remes, a veteran immigration lawyer in Washington, before the clarification.
Some of Trump’s most prominent backers had long suggested that the Muslim ban was mere campaign rhetoric, not to be taken literally. Some Canadian Muslims had assumed the same, then woke up Saturday to learn they had been separated from their families.
“On our end, we were saying, ‘That is ridiculous, that is not going to happen, don’t worry.’ But here we are, and it is happening now,” said Mahmoud Allouch, 26, a University of Toronto engineering graduate from Syria who works for a Toronto non-profit. Allouch, who is applying for permanent residency here, does not have a Canadian passport. Under the ban, he can no longer visit his sister in Washington, who has a green card, but not an American passport.
“There is uncertainty, there is apprehension, there is a lot of ambiguity. So we are playing it safe,” Allouch said. “It is really just weird to see it happen in 2017, after the world was moving towards less borders, less walls, but now we are starting the alienation.”
Iranian Canadian Congress president Bijan Ahmadi said Trump had chosen religious and national discrimination over “any credible security assessment of each case of someone who wants to enter the United States.”
“We believe that our government and all our politicians, all our MPs from different political parties, should be united on this matter, and should condemn this discriminatory policy that the Trump administration has signed and has implemented,” Ahmadi said.
Ali said Trump had targeted the “poor of the poorest, the weak of the weakest.”
Canadian refugee advocates called on Trudeau to consider changes to a 2004 pact, the Safe Third Country Agreement, which prohibits most people who have been in the U.S. from claiming refugee status at the Canadian border. With Trump’s 120-day suspension of all refugee intake, they said, the U.S. no longer qualifies as a safe haven.